The Centerpiece of Microsoft’s Massive New Expansion is 550ft Underground 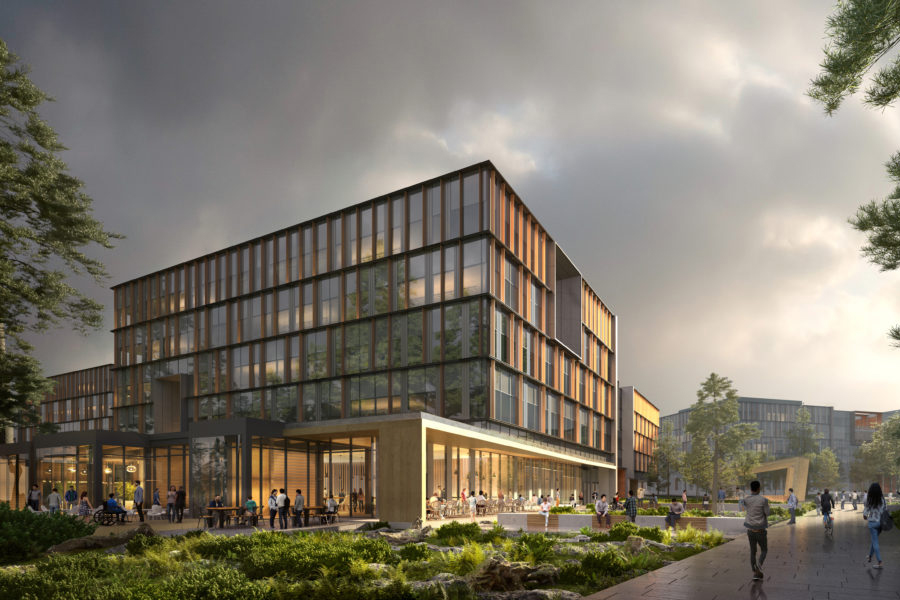 The Thermal Energy Center is the unlikely centerpiece of a 3-million-square-foot addition to the tech giant’s campus in Redmond, Washington. As its straightforward name suggests, the building will be the hub of the expansion’s new energy system, which will power the campus almost entirely through electricity provided by geothermal energy exchanges.

The center will house dozens of 65-foot-tall thermal energy tanks that will be warmed by hundreds of geothermal wells drilled 550 feet into the ground. Through a system of heat pumps, chillers, and 220 miles of pipe running throughout the campus, the Thermal Energy Center will use the constant temperatures found deep below the Earth’s surface to heat and cool the new office buildings when they open beginning in 2023. The system eliminates the need for conventional gas boilers and electric chillers, cutting electricity use by an estimated 50%.

“We were really excited about the potential to use the Earth’s natural systems to heat and cool our buildings, but also just to use a new technology and to prove that it can scale to the size of the campus that we have,” says Katie Ross, Microsoft’s head of real estate sustainability. “Zero-carbon campuses are something that can be built today.” This is not the first geothermal power system to be deployed, but Microsoft believes it is one of the biggest in North America.

In 2020, Microsoft set the goal of becoming carbon negative by 2030, meaning it would more than offset its carbon emissions completely. A big part of meeting this goal, Ross says, is eliminating fossil fuels from its new campus. For a company as big and as energy-intensive as Microsoft—think rooms full of whirring computers, a fleet of electric vehicles, and 10,000 meals being cooked daily in its cafeterias—there are a lot of fossil fuels to replace. “All of our heating and our cooling, the HVAC systems, these need to be all electric,” Ross says.

A geothermal exchange system proved to be a viable alternative. About 875 geowells have been drilled across a 2.5-acre section of the campus, which has been under construction since 2018. Once the system is complete, these wells will provide a constant temperature through the new buildings, naturally heating and cooling them, and solar panels will generate the additional electricity they require. Geothermal, when done at this scale, provides the amount of electricity and savings that Microsoft needs, while also avoiding the intermittency issues with wind and solar when the air is still or cloudy.

Montgomery says Microsoft is likely the first major U.S. company to build its own geothermal system, but expects others to follow. “It really helps to have major companies like Microsoft doing this, and be able to go to our other clients and say we really need to look at electrification here. We can’t continue to design buildings that require fossil fuels. Let’s [electrify] now so we don’t have to retrofit it in 10 years,” she says. “That’s a drumbeat we’re hitting with our clients as much as possible.”

Ross says it was important that the Thermal Energy Center be “not just some building at the bottom of a garage that no one sees,” but one that is visible to employees, customers, and the public. The center will even have a section with a self-guided tour where visitors can look inside and learn about how it all works.

“It is how the campus functions, and it is such a physical representation of all our sustainability values and how we think differently about delivering a campus,” Ross says. “We think of our campus as a living lab.”